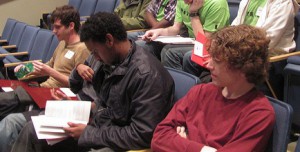 Chaim Hodges, Bruck Mulat, and Andrew Clemens competed April 8 as one of twenty-eight teams in the 2011 Indiana Colleges Mathematics Contest.  The teams were faced with eight problems that were solvable using techniques covered in the undergraduate mathematics curriculum.  For example, one problem was to prove that there exists a one to one correspondence between the set of all real numbers and the set of all real numbers except zero.  Our Goshen College team tied for tenth place. Congratulations!  More details about the contest can be found at http://sections.maa.org/indiana/ICMC/spring11results.htm.