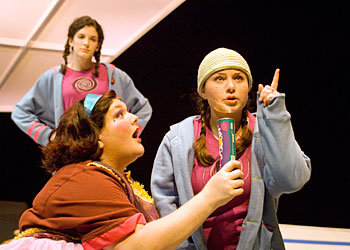 At the end of the 2007-2008 school year, Deanne Binde — one of the theater department’s most beloved members — died in a car accident while returning from Goshen College to her home in Minnesota. During her time at GC, Deanne was involved in the theater in many capacities. During the 2007-2008, she acted in Step on a Crack and Absolutely [perhaps] and served as the Technical Director’s personal assistant for the May-term musical Quilters. The Saint Plays (Nov ’08) honored Deanne’s memory through its exploration of her Catholic faith and section composed specifically for her by the playwright Erik Ehn.