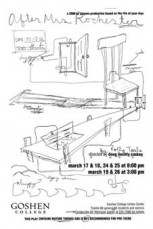 The Goshen College Theater Department presents the midwestern U.S. premiere of After Mrs. Rochester by Polly Teale, directed by Dr. Doug Liechty Caskey. The play interweaves fiction with historical fact in its exploration of the turbulent life of Jean Rhys, author of Wide Sargasso Sea (1957), a novel that invents the childhood and early life of Mrs. Rochester, the insane and violent wife of Rochester in Charlotte Bronte’s Jane Eyre. Polly Teale’s play is a potent testimony to the power of literature how fictional characters can take over our consciousness and in some way cleanse it. It is also a witness to the compulsion of writing and how this can transform the most broken of emotional lives.

The play opens in a locked room in a remote cottage in the English countryside where Jean Rhys is attempting to write a novel, until a disruptive knock at the door sends her on an emotional journey (reliving her childhood and eventual young adult experiences) that will finally enable her to write the novel she struggles to compose. At one point, an editor/publisher says to Jean: “We are all of us adrift. All of us alone and afraid and searching for meaning. That is why we read. Why we write. Why we talk to one another. We are hoping to bridge that great chasm between ourselves and others. To find ourselves in a story.” The GC production of After Mrs. Rochester attempts to explore that social chasm, potentially extending a story, a bridge for the audience to traverse.

This play contains mature themes and is not recommended for pre- teens.